Death and Taxes? On choosing life with a Green New Deal

It’s that time again. When taxes are due and we can again consider how they are used. Here’s a case for turning our national budget away from war, destruction and corporate enrichment towards reconstruction and reparations, under the umbrella concept of a Green New Deal.

The Green New Deal legislation, sponsored in the House of Representatives by the dynamic youngest member of congress, Alexandria Ocasio-Cortez (AOC) and in the Senate by our own Ed Markey, is gaining wide support – despite Republican jeers.

House Resolution 109: “Recognizing the duty of the Federal Government to create a Green New Deal,” calls for a new turn in our country. It does not include specific legislation at this point. Which is good, as it allows for broad discussion of the goals and means presented. It is worth taking the time to read the text of this bill, written in clear English, online at:

It opens by mentioning two major reports issued last fall that detail current climate degradation and make clear that the window for stabilizing the planet’s climate enough to prevent massive and irreversible damage is closing. The resolution mentions that the US helped create the problem: through 2014 this country, with a world population of just 4 percent, has been responsible for 20 percent of greenhouse gas pollution.

The goals and mobilization the Green New Deal describes go way beyond calling for technical fixes around energy. The goals include economic and racial justice, calling for well-paying jobs in a healthy environment, as part of “a Green New Deal (that) must be developed through transparent and inclusive consultation, collaboration, and partnership with frontline and vulnerable communities, labor unions, worker cooperatives, civil society groups, academia, and businesses.”

‘‘Green New Deal goals’’ should be accomplished through a 10-year national mobilization that would see the “repairing and upgrading the infrastructure in the United States” to make it energy efficient, moving to 100% renewable energy. Also mentioned, and of interest in our area, is:  “working collaboratively with farmers and ranchers in the United States to remove pollution and greenhouse gas emissions from the agricultural sector as much as is techno-logically feasible, including— by supporting family farming; by investing in sustainable farming and land use practices that increase soil health; and by building a more sustainable food system that ensures universal access to healthy food.”

The comprehensive Green New Deal resolution provides a framework to work on and for. Of course, it’s not as if the public has been blind to the dangers of climate disruption. And citizen action has in fact set the scene for a Green New Deal. Hundreds of thousands have demonstrated, and major campaigns have seen arrests, injuries and citizen bravery against destructive fossil fuel projects, at Standing Rock, the XL pipeline protests, ‘our own’ Kinder-Morgen fracked gas pipeline, and many more.

But the changes needed must go beyond divesting from fossil fuel companies and “keeping (oil, gas and coal) in the ground.” We live in a system where preparation for and participation in war takes the vast majority of our this country’s national income and so many resources, human and natural as well as economic.

What will really bring us security, locally and nationally? A healthy population in a clean environment, doing meaningful work in a more egalitarian society? Or an economy so tied to weapons of war that cause such death and destruction? The effects, and costs, of their use in Iraq, Afghanistan, Syria, Libya, Yemen, Somalia, along with the 800 plus US bases around the world will be with us, and the many countries involved, for decades to come. 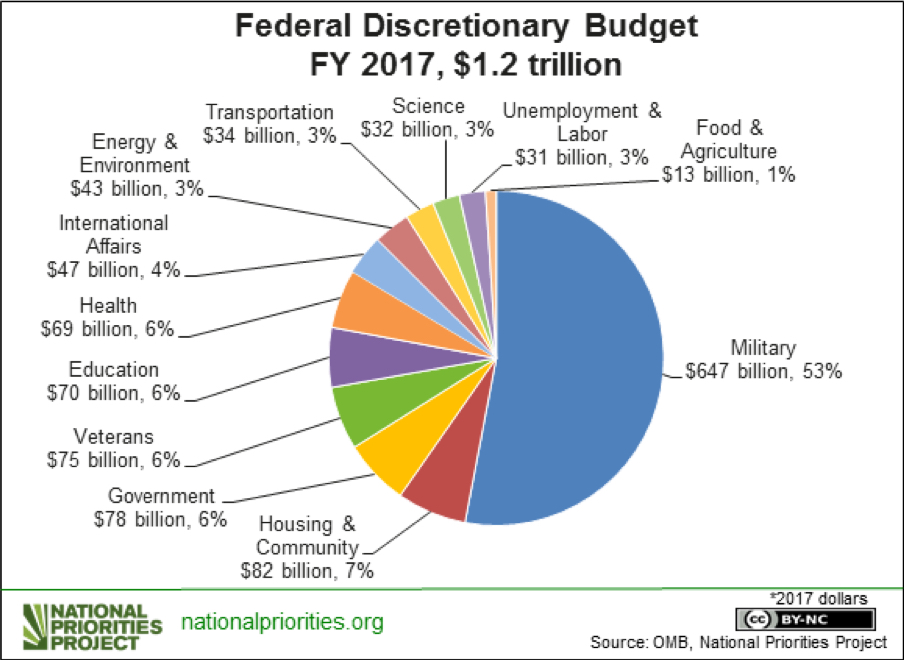 What to do? Actions vary. The National War Tax Resistance Coordinating Committee (NWTRCC) “supports individuals who refuse to pay for war, and promotes war tax resistance in the context of a broad range of nonviolent strategies for social change.” Peace Tax advocates are lobbying the US Congress to pass a Religious Freedom Peace Tax Fund Bill allowing conscientious objection to paying taxes for war with alternative tax payment programs. Internationally there are protests in many countries, including our own, during the Global Campaign on Military Spending’s days of action from April 13 to May 9th, under the slogan: Demilitarize: Invest in People’s Needs!

Certainly, the Green New Deal presents many of those social and ecological needs, and should be checked out by all as we face the current reality of fossil-based militarism and ‘endless growth,’ making the climate situation ever worse. There are alternatives.