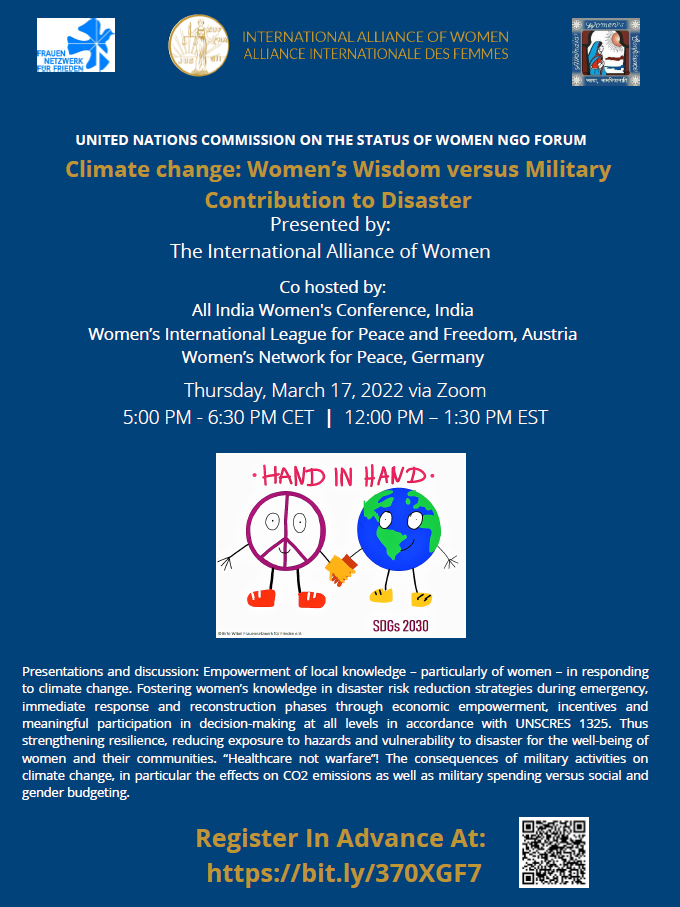 UNITED NATIONS COMMISSION ON THE STATUS OF WOMEN NGO FORUM

Presentations and discussion: Empowerment of local knowledge – particularly of women – in respondingto climate change. Fostering women’s knowledge in disaster risk reduction strategies during emergency, immediate response and reconstruction phases through economic empowerment, incentives andmeaningful participation in decision-making at all levels in accordance with UNSCRES 1325. Thus strengthening resilience, reducing exposure to hazards and vulnerability to disaster for the well-being of women and their communities. “Healthcare not warfare”! The consequences of military activities onclimate change, in particular the effects on CO2 emissions as well as military spending versus social andgender budgeting.

Presented by:
The International Alliance of Women

Dr. Manju Kak’s work as an author and academician has been in the field of art, history and sociology of culture in which she holds a PhD. Her geographical area of interest is the Indian Himalayas. She has authored six books which include three volumes of literary short fiction and a book on Nicholas Roerich, the Russian artist and proponent of the first Peace Pact. She is the recipient of national and international fellowships. She has had government consultancies, been a teacher, a visiting professor at important centres of learning and organized important and meaningful conferences. She has presented papers and participated in many conferences in India and overseas: Almaty, London, Edinburgh, New York, Montreal, Moscow etc.
As a development journalist and as a panellist on national television channels she has advocated justice,
women’s rights and peace. She has served as National Treasurer of India’s largest NGO, the All India Women’s Conference, where for 22 years she has helped promote women’s’ rights from grass root funded projects to international high tables. She is a Trustee in the government-funded Lal Bahadur, Shastri Memorial Trust, Advisory Board Lila Foundation, and BoardMember of IAW, member Indian Association of Women’s Studies, and Indian Trust for Architecture and Cultural Heritage.

As a teacher Heide Schütz joined the young movement “European Teachers for Peace and Human Rights” in 1988. By the recommendation of the Commissionon Peace Education of the International Peace Research Association (IPRA) she served as an official observer to the UN CSW conferences for a number of years.She participated in the 4th World Conference on Women in Beijing and Huairou (NGO Forum) with the overarching interdepence on “Equality, Development andPeace”. Shortly after this she founded the national NGO “Women’s Network for Peace”/”Frauennetzwerk für Frieden e.V. in Germany . She held the office of presidency until 2019, now serving the organization as honorary president. She participated in the international project of Kofi Annan, UN SG, on “The Role of Civil Society in Preventing Armed Conflict” with the final meeting at the UN in NY in 2005. She was the spokesperson of the NGO initiative “Pro UNCOPAC” (UN Commission on Peace and Crisis Prevention). Her focal points of advocacy were and still are UNSCR 1325, projects concerning Bertha von Suttner, the culture of peace, peer mediation in schools, UN Peace Day on September 21, the Human Right to Peace, international networking with women on non-violent conflict resolution, peace and demilitarization.

Rosy Weiss is French interpreter by education and a retired official in Austria’s Ministry for Social Security, Generations and Consumer Protection and the Ministryof the Environment, Youth and Family, where she was responsible for international negotiations. Ms. Weiss served as IAW President from 2004 to 2010 and aschairperson of the Vienna NGO Committee on the Status of Women from 2006 to 2009. She was involved in the drafting of reports of Austrian NGOs to CEDAWand to the Universal Periodic Review. During Austria’s EU Presidencies she served as liaison between governments and NGOs during the negotiations at theCommission on the Status of Women in 2006 and as chair ofthe Regional Preparatory Conference (The Hague Forum) forthe International Conference onPopulation and Development (ICPD+5).

I love to introduce myself as a social entrepreneur and women’s rights defender. I have been working since 2003 in my country Cameroon and abroad in many initiatives that aim to advance woman’s rights, women's empowerment, Women's Health, Girl's education, justice, and sustainable development with several charity activities to end poverty and hunger in grassroots communities and also to give smile and hope to underprivileged, disadvantaged and vulnerablepersons (women, men, youth and children). I will always stand tall when it comes to empower/inspire women and girls to DARE and ACHIEVE. I am always committed in everything that can contribute to make the world a better place for all without any discrimination: a peaceful, just, inclusive and equal world. I strongly believe that "when people come together with one vision, they can change the Unimaginable into Possible. I am lucky because the destiny always put on my way wonderful people that always mentor, coach and support me. Maybe because of my mission on this earth that is I think to take light worldwide and share it and lift up women and girls in my community that don’t have the same opportunities to move round the globe like me and learn from best practices andsuccessful stories with great women leaders and entrepreneurs. Thanks to you all.

Jacqueline Andres is on the board of the Informationsstelle Militarisierung. She completed her Master's degree in International Relations at the UniversityL'Orientale in Naples. Her research focuses include climate change and war, the European security market and its actors, the militarization and technologizationof EU migration policies, and military landscapes.